Living vicariously through myself. The posts with ❤️are my favorites, the ones with ⭐️have been most popular. About me

Which games to change?

Last week we began the “How to be a game changer” series. Today, we’ll start answering the question - “Which games to change”, by defining the two main types of games we don’t want to play - zero-sum games and win-lose games. 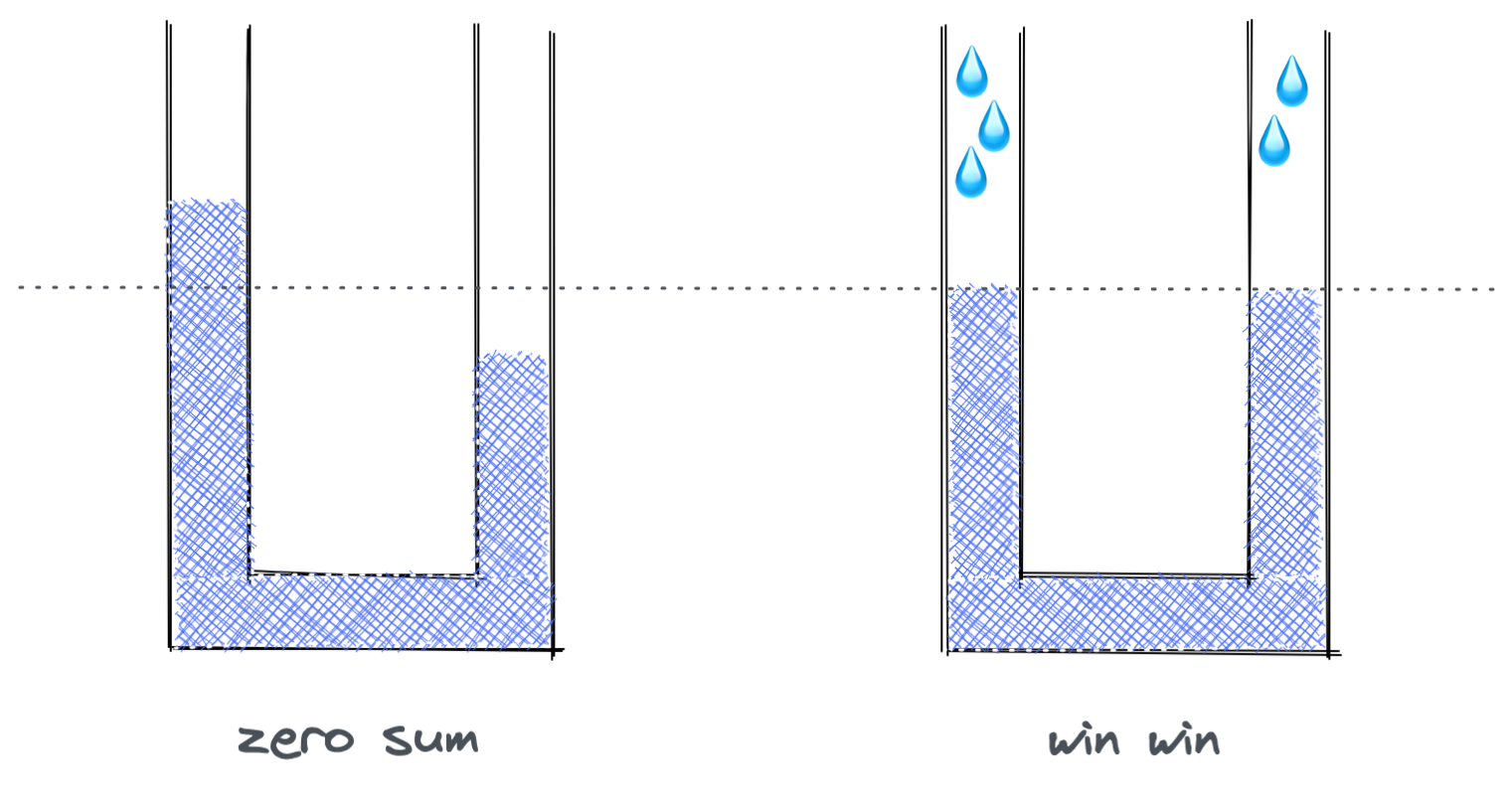 One way to simplify looking at games, is to look at the possible outcomes. There is a whole branch of Economics called Game Theory which goes into detail about categorizing and analyzing games based on these outcomes. In game theory, a game is simply an interaction between multiple parties, where they can chose a behavior, and after they interaction any participant in a game may end up winning something or losing something else, for a combination of wins and losses. Game Theory often simplifies that to a simple number representing how much value, or utility, or money you could win or lose depending on the outcome, and while it is a limiting way to look at it, it is still a helpful way get started.

One of the most obvious games which I assert everyone should try to change are the so called “zero-sum” games. Here zero-sum refers to the sum total of outcomes of all players after the game, compared to before the game. These are the games where as much as some players win, the other players collectively lose. For example if you and I bet $5 on the result of a coin toss, one of us will have slightly more money, but together our overall money has changed by zero. In zero-sum games the total amount of value and utility across all participants does not increase as a result of the game. Some people individually may be better off, but the group as a whole is not better off.

If we go back to our traffic example from the previous post, driving on a road with congestion, which has two lanes merging together into a single lane (for example, due to construction) may be thought of as a zero sum game, where only certain number of vehicles can go through a bottleneck at a time. If one car goes through, no other car is going through. There is a limit of total utility, is proportional to the maximum safe and allowed speed with which cars merge in. Often, cars will alternate from each lane as a way to coordinate, but some drivers might feel competitive, or in a hurry, and try to cut in front of others. And they may succeed, and save seconds for themselves. But by disrupting the natural rhythm, they create confusion, congestion, and waste time for everyone behind them. Other drivers may have to hit the breaks, or press their horn and reach out for verbal insults. It’s a pity. More cars will get piled further behind. The driver who cut might think they’re winning this time, but they probably suffered a time loss behind someone else earlier who cut as well, but they only observed it indirectly.

Furthermore, with zero-sum games we’re only creating more conflict among ourselves. In my opinion, all zero sum games negatively affect the participants as a whole. Therefore they are in practice even worse, they are “negative-sum games” and the community as a whole is worse off after playing them.

There’s no good reason to play these games.

Win-lose games are similar to zero-sum games as in some people will benefit, and others will lose as an outcome of the game, but they differ as in the win may sometimes seem to be larger than the loss. But in practice, if a game ends up generating some positive value in the process, it is likely that this value is redistributed, and nobody is losing and the game becomes win-win?

As a result, a win-lose game in real life will usually be a negative-sum game, as some more savvy players may figure out how to “rig” the game, and exploit others. The possibility to lose something from the game is a big red flag ⛳️. If you encounter any interaction where you may lose something - think about why the interaction is that way? Is it rigged to transfer value out of you to others.

Some win-lose games with uncertain outcomes are more tempting to play than games which obviously are zero-sum as we hope that we may win, and we may win big. For example, if we participate in a pyramid scheme, we will likely come up ahead as long as we’re not the last ones. If we knowingly participate in a such a scheme - shame on us. But even with good intentions, we often can get tricked into participating into pyramid-like scheme, where at the end the “biggest fools” will lose something. Some pyramids can have a really elaborate disguise, and a subtle giveaways.

But one giveaway which we can always use to detect games we don’t want to play is the ability for anyone in the game to “lose” in some way. Games which genuinely create value tend to have a way to redistribute this value over time, if people play them again and again, and they also incentivize people to keep creating value. And that presents another way to tell these games apart - if a game is played long term, repeatedly, it is more likely to be genuinely creating value for all participants, even if that value gets distributed unevenly. There are some exceptions such as the “scapegoat” game, which we’ll discuss in a future post.

By opting out of short term games, or win-lose games, we will not only do better for ourselves, we will make it less likely others get exploited.

Next week we’ll start discussing the tools we have available to change these games. In the meantime, don’t believe anything I wrote above, and ask yourself - “When anyone want to play a zero-sum or win-lose game?”. You may also ask yourself, “Which of my interactions are win-lose?”