Opt Out of Cynicism

A cynic is a man who knows the price of everything, and the value of nothing.

Growing up in post-socialist-turned-cowboy-capitalist Bulgaria, I grew up around a lot of cynical behavior and absorbed it deep into me. It was the water I was swimming in, and I knew no better. There was always this feeling that attempts at improvements are futile. If anyone tried to improve the system in any way, they will face a great opposition, and any value they bring forward will be immediately vultured away. This made it obvious for me to see how any changes will be abused and rendred futile. I also became good at rationalizing the existing status quo. There’s this example which stuck with me, that if someone created a coin operated parking meter, another one will quickly figure out how to steal the coins out of it. Thus, the attempt to bring order will fail, and the rationalization is that we are a motivated but backstabbing people which get in our own interest.

And today, I still don’t know much better, and sometimes view the world through cynical eyes. A cynicism frame and mindset that turns a lot of my life into a zero-sum game. When I recently realized that I’ve been carrying this cynical mindset for a long time, my legs felt soft, and my body started shaking. I was reckoning all the mistakes I’ve made with this mindset.

But what do I mean by being cynical? When you’re conversing with someone, it is often easy to detect the frame through which they view the world and the interaction with you. Cynics think that the world is never changing on a fundamental level, but it only changes cosmetically, and superficially. Cynics may look at some new trend and call it “lipstick on a pig”. According to cynics, the world operates in a certain way, the elites are always the same, and will always be the same. The cynics think we are always playing the same game that has always been played. For example, a cynic may think that media’s only purpose is to sell your attention to advertisers - like I did here. And often they might be right.

We never try to be cynical. At least not consciously. Instead, we try to make models of the world. And we often simplify those models by ignoring the fact that the world today is different than the world ten years ago, and alien to the world a hundred years ago. We take a mental shortcut, but we end up in a dead end. 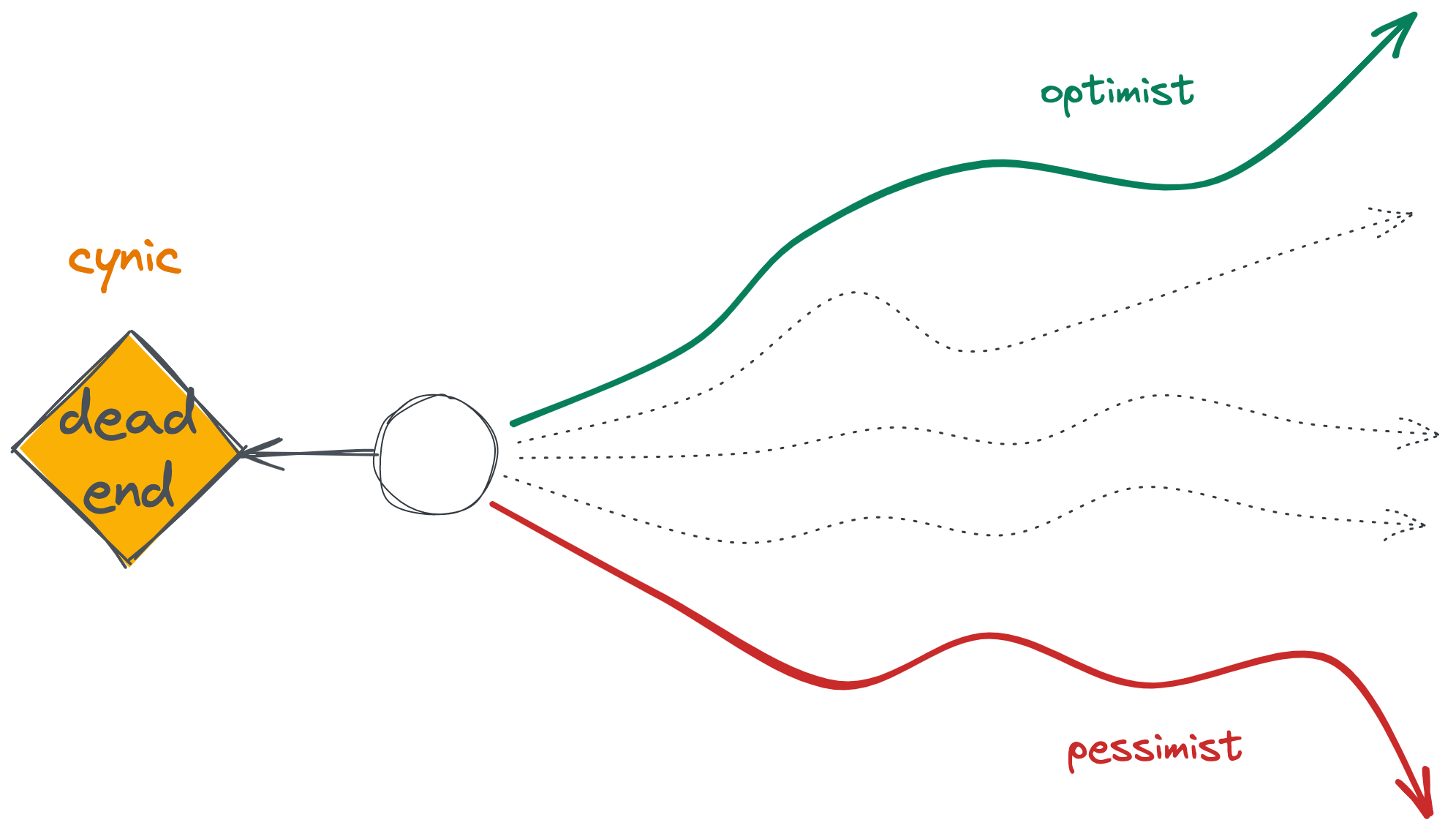 Optimists, and even sometimes pessimists, see the world changing, for better or worse, and with it, the games we play change as well. They’re also both right to some degree. Cynics have fixed mindset, whereas optimists have growth mindset. The opposite of an optimist isn’t a pessimist, as they both realize that the world is changing and time moves forward. A pessimist also has a growth mindset, except they have a negative sign in front of it. The opposite of an optimist is the cynic.

We are more likely to detect cynicism in others than in ourselves. For example if you approach a friend suggesting you both bake a pie together, they start talking about dividing the pie - they have the cynical fixed mindset. Or if a friend complains a lot, that’s also a cynical mindset - they don’t see a way to change the world, or their environment, and all they have left is complaining.

When we detect in others, we’ll be more likely to detect in ourselves as well, and not only filter cynics out of our lives, but sometimes re-align them to a growth mindset, and attract other partners with growth mindset. Growth mindset says “yes and…” instead of “yes, but…”, or “no, but…”. And we may even re-align ourselves, to start recognizing all the ways the world may change - for better or worse.

One of the strongest medicines against cynical mindset which I’ve tried is to do a “no-complain challenge”. I find its effects to be enormous and durable for years. In this challenge, you move a bracelet from one wrist to the other when you catch yourself complaining. The goal is to make it 21 days without having move the wrist. I did it years ago, and by the end of it, it felt as if I am in a different universe. With the years, some of its effect has rubbed off, and I am due a refresher. 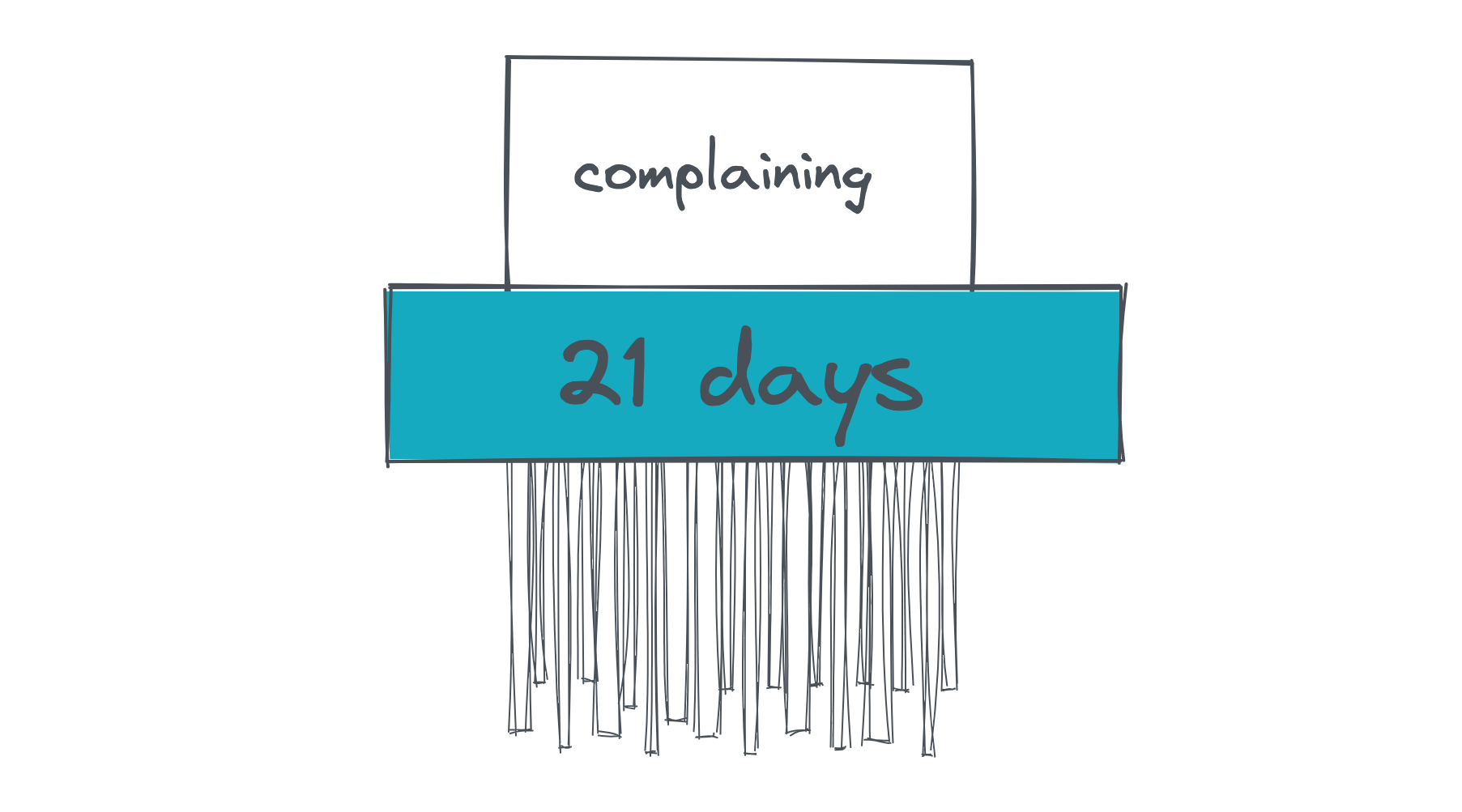 By realizing that the world is always changing, and by stopping to complain, we opt out of seeing the world through cynical glasses, and become part of the change. When we realize that our life can change, we can change it.

The Sorting Hat of Sales Mindset

Self arrest on the Slippery Slope of Addiction